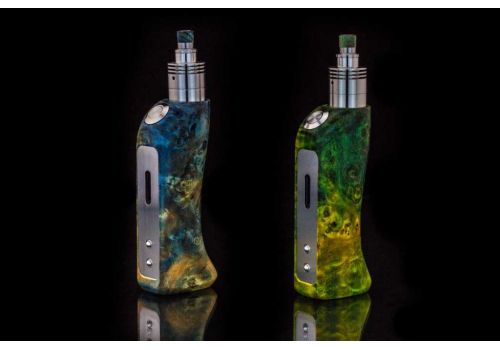 For many vapers, Gepetto Box Mods need no introduction. When it comes to vibrant stabilized wood mods, his piece of Polish art, the Gepetto, is widely considered one of the nicest mods on the market. Since 2011, Gepetto began woodworking and carving mods for himself and his friends. He rapidly gained worldwide recognition within the high-end vaping community.

From the Robusto, Elite V1, to the S.L.A.P. (Something Like A Pipe), all his mods are made with passion and attention to detail. When tube mods were still popular among the high-end community, Gepetto released the Elite V2 which featured beautiful wood with a stainless steel cylinder showing through it, giving the Gepetto a unique but yet aggressive look.

Product Type:
Similar products
Stay in touch
My Account
Shop
Contact us
© 2004-2022 Wide Eyed owl.  You must be 18 years or older to make purchases using this website