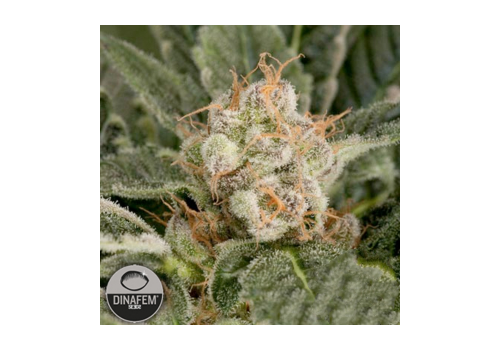 Dinafem Seeds Blue Fruit was originally developed in the mountains of Oregon in the United States and later spread all over North America, including Canada, where he was heavily cultivated, selected, developed and improved. The instability is manifested in the form of mutant plants that grow with deformed leaves, but when flowering surprised with amazing aromas and resins. Blue Fruit cannabis seeds produce a sweet fruity aroma. The taste is also sweet and fruity and in some specimens this flavour is so intense that the smoke it produces has an aftertaste that lingers for a long time. It is often necessary to control the plant height, especially indoors. Also Blue Fruit produce more occasional male flower on top of their flower clusters. Again, this is also justified by the special quality, colour, resin, aroma and flavour of this little jewel. The vast majority of plants that produce some male flowers are not an issue, but it is advisable to maintain the cool temperature and humidity at 50% and not stress the tops of the plants with lights. Resin is produced in abundance, and the effect is of a mixed physical and mental psychoactive but balanced by the soothing effect that also produces. The final combination of it's autumn colour, aroma and taste of berries, has captivated many thousands of growers worldwide. Please Note: This content is for informational and educational use only. Wide Eyed Owl sells all seeds strictly for souvenir purposes only or for storage in case the laws in the UK may change and for the conservation of cannabis seeds. We do not condone or encourage the germination of these cannabis seeds and we will refuse a sale to anyone who leads us believe they will use these for anything other than souvenir purposes. Seeds sold by Wide eyed owl may not be germinated in countries not legal to do so. WARNING: IT IS A CRIMINAL OFFENSE TO GERMINATE CANNABIS SEEDS IN MOST COUNTRIES.
Brands:
Dinafem Seeds
Similar products
Stay in touch
My Account
Shop
Contact us
© 2004-2020 Wide Eyed owl.  You must be 18 years or older to make purchases using this website